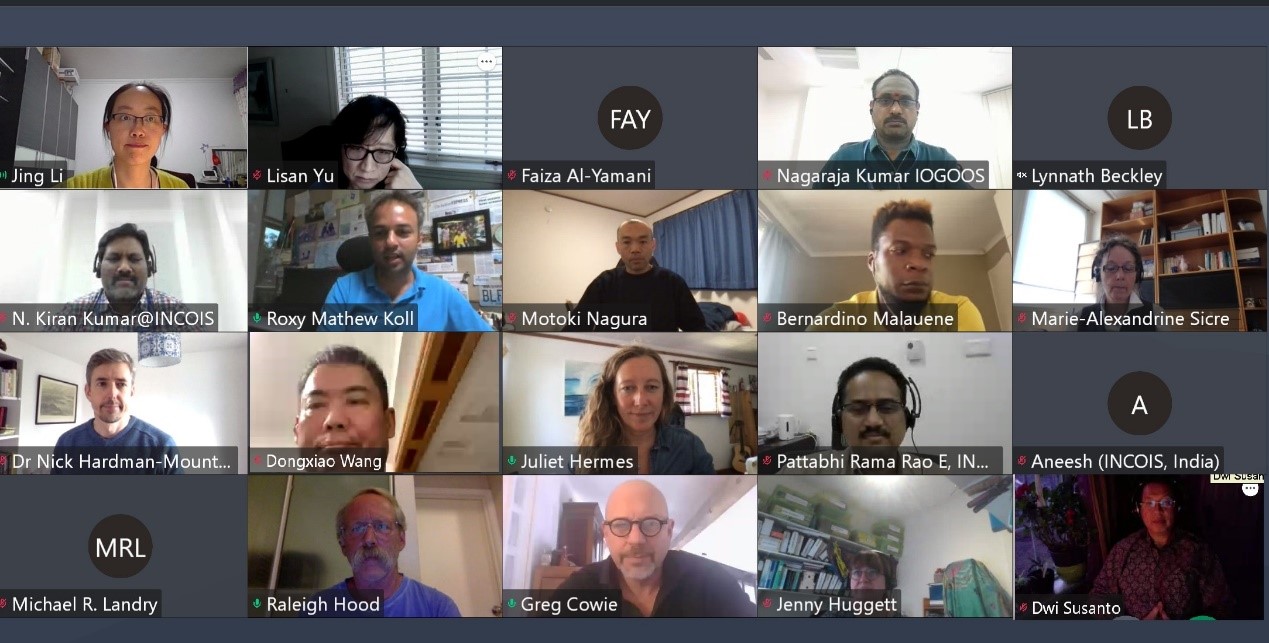 IORP-18 was organized in two parts – Part I was for 2 hours dedicated to IORP business. Four new members - Marie-Alexandrine Sicre, Janet Sprintall, Shikha Singh and Eluri Pattabhi Rama Rao - have been recruited by IORP in 2022, enhancing the diversity of the panel. And the newly recruited ECS member could help strengthen the networking with the Early Career Scientists in the region and globally, and provide support to the Indian Ocean Youth Ambassador initiative proposed by IORP. The IORP co-chair then made a brief introduction of IORP and identified the need to update the Terms of Reference to reflect the new structural changes of IOC/GOOS. The updated ToR of IORP will be brought to the SSG-27 for approval. The IORP-17 tasks as well as the IORP annual report and feedback from CLIVAR Scientific Steering Group (SSG) were revisited. It was noted that the IORP Task Team on Expand Science to Society and Policy Makers is of great interests of IORP members and partners, which should be further promoted. The 2nd agenda item for IORP business meeting was focused on the way forward for the 2nd phase of Indian Ocean Observing System (IndOOS-2). Updates from IRF, RAMA, GO-SHIP and national progress, as well as two upcoming IORP capacity building workshops on ocean observations were presented. It was agreed to continue the effort of the IORP Task Team on IndOOS-2 Recommendation Tracking in collaboration with IRF and IIOE-2, aiming to prepare a progress report of IndOOS-2 by assessing the COVID impacts on IndOOS-2. In the final part of IORP-18 Part I, four new members and Dr. Dwi Susanto made scientific presentations. It was suggested to share the slides and create running Google Doc for panel members to input their updates.

IORP-18 Part II was jointly organized with SIBER, aiming to form closer links between IORP and SIBER, looking to 2025 and beyond. Brief round table updates from Indian Ocean partners (IIOE-2, IOGOOS, WIOMSA, IOCINDIO) were presented during the meeting, followed by the current collaborative actions and scientific updates from both IORP and SIBER. A pilot project on CoLaB (Coastal Lab in a Box) is being jointly promoted to develop sustainable low-cost coastal observing systems in under resourced countries. More strategic discussions were formulated around the topics that are of common interests of the two groups: Indian Ocean ‘Youth Ambassador’ initiative and the possible linkage with Interdisciplinary Marine Early Career Network (IMECaN) of IMBeR; capacity building in the Western Indian Ocean; possible contribution to the UN Ocean Decade and enhanced communication between IORP and SIBER.