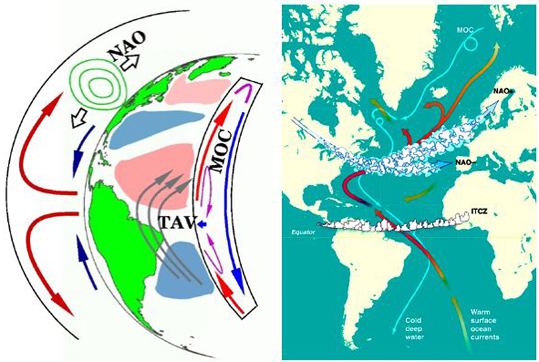 Modes of Climate Variability in the Atlantic Sector. The figure on the right shows the path and strength of winter storms depending on the sign of the NAO; the location of tropical rainfal (determined by the ITCZ); and the transport of the ocean currents (MOC). Blue arrows:cold, deep currents; red arrows:warm surface currents (source: M. Visbeck, 2002; Science 297, 2223-2224).

The Terms of Reference of the Atlantic Region Panel are:

· Tropical Atlantic Observing System (TAOS) review – The TAOS review was organised by the CLIVAR ARP to evaluate scientific progress since the last review (2006) and recommend actions to advance sustained observing efforts in the tropical Atlantic.

· Tropical Atlantic Climate Experiment (TACE) (2006-2011)  The TACE goal was to advance the understanding of coupled ocean-atmosphere processes and improve climate prediction for the tropical Atlantic region.

The ICPO contact for the CLIVAR Atlantic Region Panel is Jing Li.