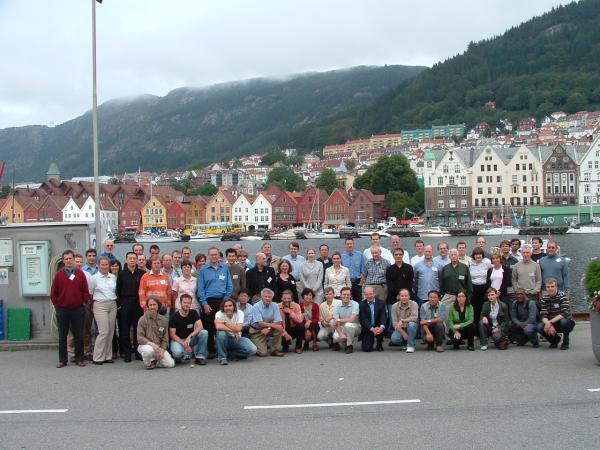 Participants at the Workshop on Numerical Methods in Ocean Models

The purpose of this workshop was to bring together scientists and engineers active in the field of ocean model development. Participants discussed and debated avenues towards the creation of leading edge ocean models for use in regional and global applications. The workshop emphasis was on fundamentals of design and methods, rather than applications. The workshop provided a venue where international participants educated one another on the latest advances in ocean model development. It will also provided feedback and recommendations to the two scientific organizers of the workshop: International CLIVAR Working Group on Ocean Model Development (WGOMD) and the Layerd Ocean Model (LOM) steering committee.

Ocean models have reached a stage of adolescence, in which the first generation of models created in the 1970s-1990s is steadily evolving into a second stage. The second stage is characterized by models with a high level of scientific integrity and transparency, where codes employ state of the art methods, maintain scientific documentation, and emphasize ease of use for a broad community.

The evolution of ocean models is prompted by a growing range of high profile scientific and engineering applications, from refined resolution regional modelling and forecasting to centennial-millenial global earth system modelling aimed at projecting future climate. Groups worldwide are aiming to improve model design and numerical soundness to better meet the needs of these applications. This work involves a significant number of fundamental questions, such as what equations to solve, which coordinate system to solve the equations, what horizontal and vertical mesh is appropriate, what physical parameterizations are required, and what numerical algorithms allow for computational efficiency without sacrificing scientific integrity.

Furthermore, given the increasing size of many applications, as well as the difficulties of doing everything in just one group, there is a growing level of collaboration between groups. This collaboration spans the spectrum of algorithm sharing to merging previously disparate code bases.

The workshop keynote speakers will be responsible for writing an extended abstract of their material. They will also include selections from other contributors to their session. This material will be included in the WGOMD's report on the workshop.