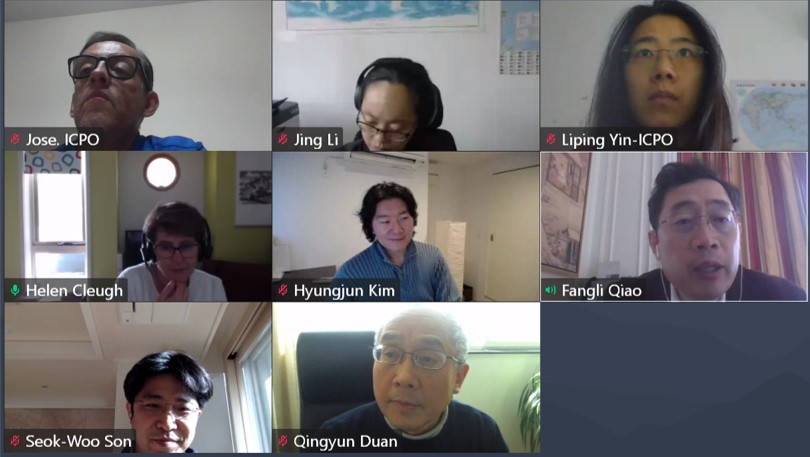 The first teleconference of the Regional Focal Points (RFP) Team for the sub-region of Eastern Asia, tasked with preparing the WCRP Regional Climate Forums (RCF) was organised on 15th December 2020, with the participation of representatives from WCRP Joint Steering Committee (JSC), GEWEX, SPARC and CLIVAR. Fangli Qiao and Hyunjun Kim are the co-leaders for the WCRP RCF preparation in Eastern Asia. Staff from the International CLIVAR Project Office (ICPO) will provide the logistic support to the RCF organisation in this region. This telecon focused on the discussion of the content, speakers and audience of the first RCF in Eastern Asia, which is planned to be organised in the first quarter of 2021.

Dr Helen Cleugh, gave an overview of the last telecon for RFPs in Asia and Oceania in October, reminded that the RCF is not only important for us to introduce WCRP to the region, but also to provide a platform for the region to engage with WCRP. She also mentioned that the process was a bit slower than expected, as there are many new initiatives of WCRP being developed, we want slow down a bit the process to make them more mutually beneficial.

Helen also shared the feedbacks from RFP telecons of other regions, e.g. Southeast Asia region suggested to have a presentation on CORDEX; Africa region would like to get a perspective from WMO; in addition to the science focused talks, some regions suggested to have talks from end users’ perspective (e.g. policy makers, climate impact and adaptation community, etc.); Christian Jakob from Australia and co-lead of ‘Digital Earths’ LHA will talk about why engaging with WCRP can be beneficial.

There will be several RCFs in 2021. Each RCF will be in 90 minutes, with a 20-min presentation on WCRP by Chair or Vice-chair of the WCRP JSC, Detlef or Helen, 70-min scientific talks and discussion. The content for RCF could be quite variable among regions, it will depend on what people think that could be of value to the region. This Regional Climate Forum is aimed for the Eastern Asia sub-region (China, Japan, Republic of Korea). Participants of this telecon thought that the Early Career Scientists should be a focal group to be engaged in the upcoming RCF.