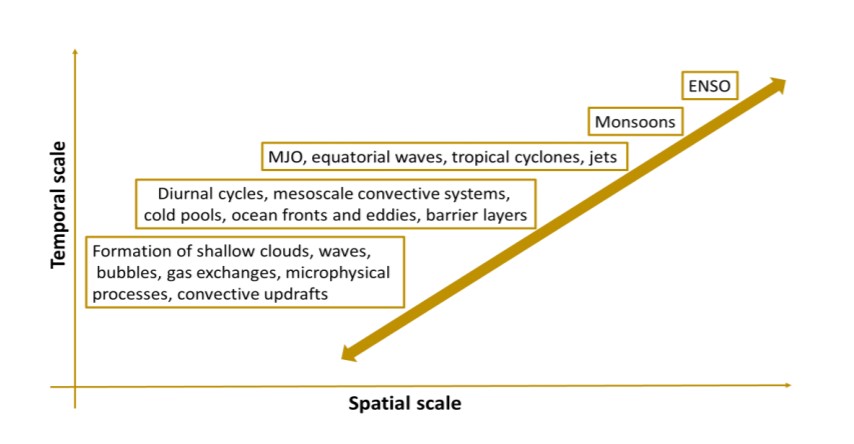 Fig. 1 A sampling of the phenomena discussed at the workshop demonstrates the broad range of spatial-temporal scales involved and the cross-scale interactions. The spatial scale ranges from <1 to >100,000 kilometers and the temporal scale covers from < 1 hour to multi-years. (Hagos et al., 2019)

The workshop identified key areas where progress has been made over the last 30 years, including the understanding of key dynamical processes underlying different flavors of El Nino Southern Oscillation (ENSO), the Madden-Julian Oscillation (MJO) propagation mechanisms and some of the key  air-sea interactions associated with the MJO. In parallel with these advances in scientific understanding, much progress has been made in observational and modelling technologies such as space borne radars, autonomous vehicles as well as  convection and eddy resolving models.

Workshop participants also highlighted several key gaps in scientific understanding and limitations in technology, including: 1) the relative roles of momentum and thermodynamic feedbacks in the zonal movement of the western Pacific Ocean warm and fresh pools and the implications of these displacements for the onset of El Nino; 2) the multi-scale processes affecting variability and predictability of the MJO; 3) the net effect of small-scale phenomena on convection transitions and organization, as well as the processes associated with the formation of high clouds and their implications for the top of the atmosphere radiative balance; 4) the formation and evolution of ocean barrier layers and their potential effects on air-sea interactions at larger spatial scales or longer time scales and under extreme conditions (high winds and rain), etc.

In order to address these key science issues, participants noted that some technological challenges must be met, and an innovative and efficient integration of data from sustained observing systems and short and intensive field campaigns is required. Such integration also needs to be informed by existing scientific understanding of the processes of interest and by modelling needs. Recommendations for accelerating our scientific understanding of atmospheric convection and air-sea interactions over the tropical oceans were highlighted by the participants, including: 1) A tropical observational and modelling “super-site”; 2) Investment in aerial and oceanic autonomous vehicles; 3) Investment in data preservation and in detailed documentation ofdata quality and accessibility; 4) Effective communication of progress, challenges and opportunities with the general public and policy makers; and 5) Continued interactions among convection and air-sea interaction, modelling and observational communities through joint sessions in the major geoscience conferences.