2022: Another Year of Record Heat for the Oceans 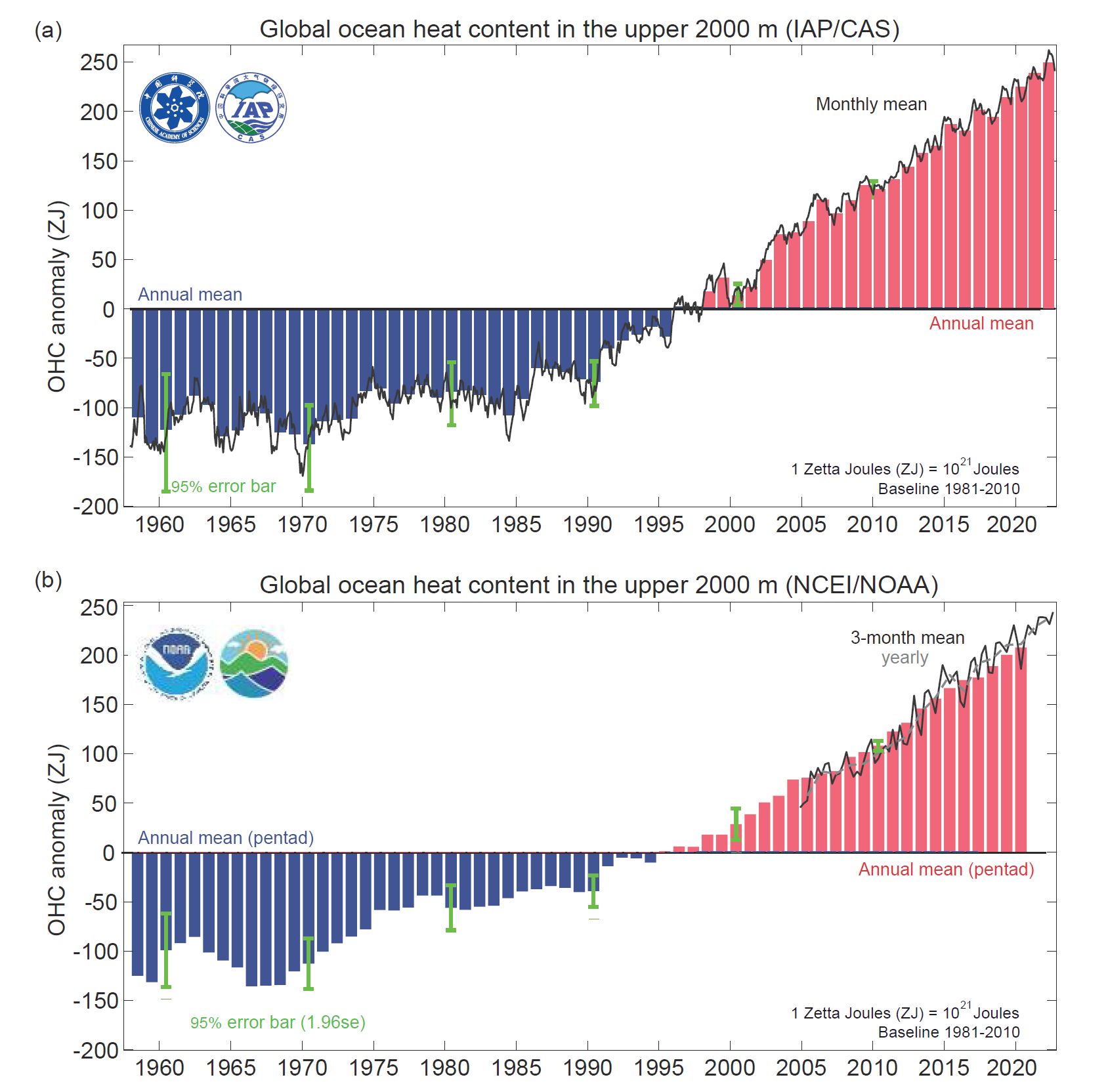 Changes in ocean heat content (OHC), salinity, and stratification provide critical indicators for changes in Earth’s energy and water cycles. These cycles have been profoundly altered due to the emission of greenhouse gasses and other anthropogenic substances by human activities, driving pervasive changes in Earth’s climate system. A recent study led by Dr. Lijing Cheng, a member of the CLIVAR Global Synthesis and Observations Panel (GSOP), indicated that 2022 was another year of record heat for the oceans. Based on analyses from two international groups (IAP/CAS and NCEI/NOAA), this paper provides estimates of the ocean heat content (OHC) in 2022. Salinity and stratification are estimated based on IAP/CAS data.

According to IAP/CAS data, the 0–2000 m OHC in 2022 exceeded that of 2021 by 10.9 ± 8.3 ZJ (1 Zetta Joules = 1021 Joules); and according to NCEI/NOAA data, by 9.1 ± 8.7 ZJ.  The slight differences between the IAP/CAS and NCEI NOA estimates reflect differences in the analysis methods (mapping, quality control, data coverage, etc.), but both show excellent agreement. Among seven regions, four basins (the North Pacific, North Atlantic, the Mediterranean Sea, and southern oceans) recorded their highest OHC since the 1950s.

The salinity-contrast (SC) index, a quantification of the “salty gets saltier–fresh gets fresher” pattern, also reached its highest level on record in 2022, implying continued amplification of the global hydrological cycle. The 2022 salinity anomalies relative to 1980-2019 baseline reveal that most of the Pacific and Eastern Indian Oceans, are currently undergoing a freshening; while relatively saline areas, such as the midlatitude Atlantic, the Mediterranean Sea and West Indian Oceans are becoming more saline. The ocean pattern of change, driven by long-term atmospheric water cycle change related especially to precipitation anomalies, also indicates ‘the wet gets wetter and dry gets drier’ paradigm, which describes the amplification of the water cycle driven by global warming. On land, it means stronger and longer dry spells and more heavy rainfall events with potential for flooding, as has been observed.

Global upper-ocean stratification continued its increasing trend and was among the top seven in 2022. The increase stratification in the past century suggests the vertical structures of the world’s oceans have become more stably stratified because of changes in both temperature and salinity. As water layers become more stable, vertical mixing is expected to decrease, which then impacts vertical exchanges of heat, carbon, nutrients and other concentrations. The substantial interannual fluctuations in stratification are dominated by ENSO, specifically, thermocline variations and formation of barrier layers linked with ENSO.

Regional warming patterns are also displayed and local hot and cold spots in 2022 are identified in this paper. Four out of seven regions reached record levels of heat content for their upper 2000m OHC, and all seven regions were among the top ten warmest year. According to the authors, tropical OHC and salinity changes in 2022 were dominated by the strong La Niña event.

The authors suggested to include other metrics in the future that can indicate ocean health in the future studies, such as ocean oxygen and pH. Furthermore, the ‘spatial inhomogeneity’, other metric to synthesize changes in the ocean temperature and salinity, can also be further investigated.